…and other good problems.  I don’t think 2016 was even two weeks old when I got the news that my good friend Gregory Toliver had died.  Gregory was another complicated genius I was fortunate enough to know, and with his passing I’ve come to realize how insanely lucky I am to have known so many like him.  And for now, that’s all I’m going to say about his passing.

2015 was mostly spent working on my MFA and working my full-time job on top of that, so while I did a LOT of writing, I submitted to damn near zero journals.  2016 will be different.  I’ve already submitted to two journals this year.  One of them has already rejected my submission, which is fine.  Toward the end of last year, I read a few poems during the open mic of a poetry reading in Pomona, and after I was asked by Andrew Turner (a friend) to submit one of them to his journal, East Jasmine Review.

There’s going to be a lot of links in this post.  It reminds me of the old geocities days.

Anyway, Andrew asked me to submit it, and I was very flattered and I did, and he published it.  I’m not sure if it’s in the newest issue or just on his site, but whatever.  You should buy the last several issues, EJR is a truly fine publication.  He also asked me to give him a recording of me reading it, so you can read it or listen to it here (I can’t deal with the sound of my recorded voice, but maybe you can):  Psychedelic Codeine Mobius Strip

Week and a half ago, I was asked by my friend David Stone for any of my love-themed poetry for a Valentine’s Day article he was writing for the Press Enterprise.  That article was published yesterday and you can read it here.  It was also published in the print edition. 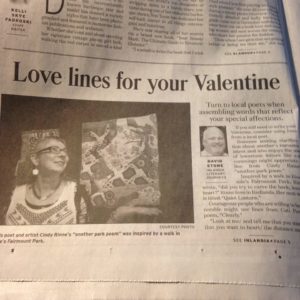 That’s my friend Cindy Rinne pictured to the left.  Easily the highlight of this last weekend was having one of my poems appear on an image I altered, next to a wedding cake made by my wife, Annette, at the Simply Red exhibition at the dA Center for the Arts.  Annette signed us up to contribute something to the exhibition, and I had no idea what I was doing until about a week ago.

The poem that was quoted in the Press Enterprise yesterday was written very specifically for Annette.  I decided to rewrite it into something a bit more broad, and then she thought it would look nice on a picture of Morro Bay, which is one of our favorite places (and also mentioned in the poem).  Problem was, I couldn’t find any of the pictures I’ve taken of Morro Bay, so I had to find one to work with.  This turned out to be incredibly easy.

I stumbled across the photography of Josh Willems, who I guess is a biologist.  Photography is his hobby, but he’s seriously good at it.  I found this image of Morro Rock on his site (click for hi-res).

Gorgeous, yes?  So I reached out to Josh on Facebook and he got back to me less than 24 hours later, enthusiastically allowing me to use his image.  I’m always amazed by the generosity of the creative folks I encounter.  They’re good people.

But the theme of the exhibit is Simply Red, so I had to run it through Photoshop, which I had to do anyway in order to paste my poem over it.

While I was doing that, Annette was hard at work making an enormous wedding cake, which would be on display for the first few hours of the night, and would then be eaten by the people at the gallery.  Annette is amazing.  Her cakes are genuinely works of art, and they taste fastastic, and if we’d opened our bakery five years before or after the recession, she’d be all over your television.  Anyway, the end result looked like this (click for a better image). 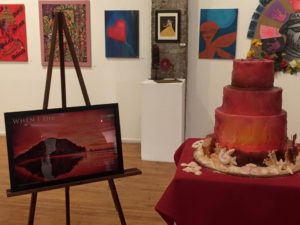 I wish I’d gotten a better picture, this one barely does it justice.  Everything on that cake is edible of course.  Crazy proud of her.  A hi-res version of my image / poem can be seen by clicking on the image below.

Meanwhile, I’m finishing my MFA this year.  Sixteen, seventeen weeks from now, I’ll have my degree and then, ate the age of 47, I’ll have to go out into the world and pretend to be a grownup.  The fuck is that all about?

Easily the one thing that’s going to eat away at my sanity most over these next months is finishing my thesis.  There are two parts to the thesis:  The manuscript, which has to be anywhere between fifty and a hundred pages (mine will be much closer to fifty), and the SOP (Statement of Purpose), which is the academic writing bit.  My manuscript is currently at 45 pages, has a title, and is looking good.

Keep in mind that “looking good” means wildly swinging back and forth between “not feeling embarrassed by it” and “everything I’ve ever written is dog shit.” 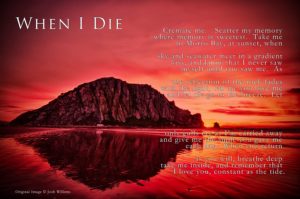 Added to that, is the fact that a lot of what’s in that manuscript is semi-autobiographical, detailing the complicated, frequently-ugly relationship between my father and I.  Many of the poems in this manuscript have already been published, in one form or another, by other journals so a lot of this is already public.  I’m going to do my best to see the whole thing published, however, which means at some point, I’m going to have to deal with family reaction.

But even that stress is just me working as hard as I can to avoid my SOP.  I have literally zero trouble writing long-winded academic essays, but when you have to write about your own writing?  As though you’re fucking Wordsworth?  Yeah, I’m having real trouble with this.

Q:  How do you write about your writing, taking your work very seriously, without sounding like an asshole?

Maybe.  Or maybe I should just shut up and get back to work.