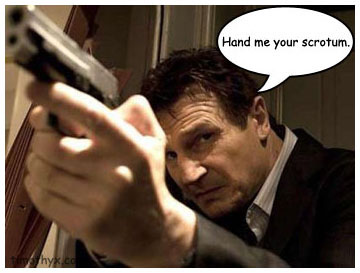 Bryan Mills (Liam Neeson) is a former spy, who retired in order to get closer to his daughter, Self-Centered Teenage Girl #1, who lives with his ex-wife.  His ex-wife, Lenore (Famke Janssen), is a total dick who’s more interested in being her daughter’s best friend than she is in being her mother.  Lenore is now married to Sensitive Beard Guy, who’s impossibly rich and overcompensates for something by throwing money around.

Bryan takes a one-night security gig, protecting a Britney Spears clone before and after her concert.  After the show, some complete idiot attacks her with a knife and Bryan takes him out with less effort than it probably takes him to wipe his ass in the morning and you’re all conflicted and shit because she’s a Britney Spears clone and so you kind of wanted her to die.

This is when the movie gets awesome.

Maybe half an hour later, Bryan is over at Lenore’s house demanding that Sensitive Beard Guy get him a jet to fly to France on right now.  As he’s going through Self-Centered Teenage Girl #1’s room, he gets a call from a friend who still has access to government databases and he tells Bryan that the Albanians are Albanian, what town they come from, and the name of their leader, and you have a raging boner at this point but at the same time you’re also kind of sad because you know nothing works this well in real life.  It doesn’t matter though because Bryan’s about to start throat-punching bastards right and left and you know already that this movie is going to rock your balls right off like an old-school Blasters song only, you know, maybe a little less energetic.

So Bryan gets to France and starts throat-punching bastards left and right and you can’t believe how satisfying it is to watch people who traffic in young girls getting killed.  When one of his leads goes stale, he comes up with something else and every time he encounters a new group of Albanian douche bags he just brutally wastes them like the useless little Turd Goblins they are and it’s fucking glorious.  Then he deals with an old friend who’s now a corrupt, Parisian cop.  I’m not going to talk about this scene because I’m afraid that if I do I’ll climax here at my desk, and I’m writing this at work, but I will say this:  Bryan is a fucking asshole.  Seriously, we already knew he was a bad ass, but holy shit balls, he is a mean-spirited, cold-hearted prick.  But it’s all in the pursuit of finding his kidnapped daughter so you really don’t care, even though you’re making a mental note to never be friends with anyone who used to be a spy.

After that, things get bloodier and everything culminates with one of the most satisfying fictional murders ever filmed and you’re just screaming, “Take me, Liam Neeson, I’m yours!”  Okay, I’m honestly not sure if that last part was me or my wife.  It’s possible I was just thinking it.  Seriously, my friends and I used to joke around and say shit like, “Celebrity X is so cool, if I were a girl, I’d fuck him,” and I really don’t want to address the obvious sexual confusion that must have been going on at the time, but I will say that even without the surgery, Liam Neeson could probably talk me into fucking him.

The only bummer about this whole movie was learning that I’d just seen the tame, American version and that there’s a director’s cut / European version available that shows the Turd Goblins dying even more violently and THIS IS SOMETHING I MUST HAVE.

Some of the morons on the IMDb boards whine about the movie not being very realistic.  Jesus Christ, I want to sell those fucking idiots to Albanian Slave Traders.  This movie has about as much to do with reality as fucking Spider-Man.  In fact, it really is just a hyper-violent super hero movie without all the spandex and fetish gear.  And it rocks your fucking balls off.