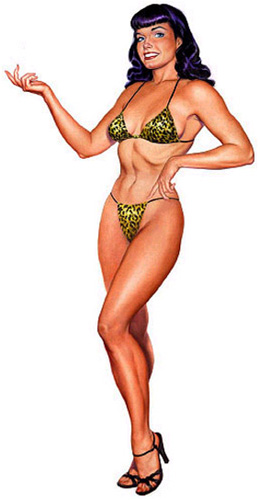 Well, shit.  I guess Bettie Page died yesterday.  I’m about as sad as a person can be over news of the death of someone they never met or knew.  Which is to say, I’m kinda bummed.  She was awesome.

Like most comic geeks, I was introduced to Ms. Page by Dave Stevens in his comic book The Rocketeer (it’s called a graphic novel these days, but back then it was a back-up feature in various comics published by Pacific Comics).  I was probably fifteen or sixteen when I first read it and I’ve been a huge fan of Bettie’s ever since.  Initially, I was a fan for the simple fact that she had a great body and liked being photographed naked.  As time passed, however, I learned more and more about her and discovered that she was just an insanely cool person who had an amazing (and sometimes very sad) life story.

Dave Stevens, ironically enough, passed away earlier this year.  He was an incredibly gifted illustrator who had a passion for pinup models as well as the old pulp heroes from the thirties and forties and somewhere during the creation of The Rocketeer, he decided that a struggling young model and actress named Bettie would be the perfect girlfriend for the character.  And he was right.  I don’t believe he ever gave her the last name of Page, but it didn’t take more than a glance at his drawing of her to figure out who she was based on.  This wound up adding to the growing Bettie Page revival that began sometime in the mid 70’s and by the end of the 80’s, her image could be found damn near everywhere.  And these days…go to any bar on the weekend and you won’t be able to go five minutes without seeing some rockabilly chick sporting Bettie’s famous short-bang hairstyle (usually accompanied by the standard leopard-print shoes, pants, handbags, etc…).  Hell, I think one of the stores my boss owns sells Bettie Page wallets. 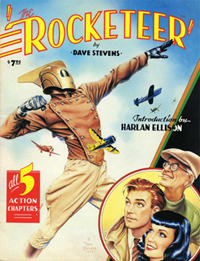 That’s Bettie in the lower right hand corner of the first Rocketeer collection there.

This is the link to the article reporting on her death.  And on her web site, there’s an obit up, written by Mark Roesler, her agent and friend.  In the obit, Roesler says:

She captured the imagination of a generation of men and women with her free spirit and unabashed sensuality.

Based solely on the number of women I’ve seen emulating Bettie’s look over the last twenty years, I’d say she captured more than just one generation’s imagination.  In fact I’d go so far as to say she accomplished more than damn near everyone in the entertainment industry ever does and she did so just by being herself.  That’s a pretty amazing thing when you think about it.

Anyway, enough blathering from me.  Here’s to Bettie and to hoping that wherever she is, she’s happy and at peace.

UPDATE:
This just in from my friend Tom, saying pretty much everything I said in far fewer words:

She wasn’t so much a pin-up model, as she was THE pin-up model.  She was a mother fucking smoking hot brunette in a time of “gentlemen prefer blondes”.  Godspeed.

Tom’s kind of like a haiku whereas I’m more of a long-winded epic poem.  Which might be the most pretentious shit anyone’s ever said about themselves.