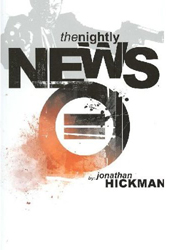 I love this comic so fucking much that it will be nearly impossible to not wax lyrical about it like a love struck high school girl going through her first serious crush.  But I’ll do my best.

The Nightly News is just an amazing comic book, written and drawn by Jonathan Hickman, that I seriously can’t see being told in any other medium without being watered down to the point where it isn’t even worth it to tell the story.  That’s because, on the surface, it would seem to advocate the wholesale slaughter of everyone in the news media.  Not a whole lot of television stations are gonna be too hip to that.  Hickman claims his inspiration for The Nightly News “were the stories of innocent people like Richard Jewell (the Olympic Bomber) whose lives are basically ripped apart by billion dollar companies so they can entertain us/boost ratings/charge higher advertising rates/make more money.   There are a lot of stories similar to his out there.”

The basic plot centers around The First Church Of The Brotherhood Of The Voice, a cult that has declared war on the American news media.  The members of the cult are people whose lives have been ruined by careless and indifferent reporting, all of whom want revenge and are willing to die for the cause.  However, the story isn’t a simple revenge / mass murder story.  It’s also about globalization, media conglomeration, the pursuit for ratings and the very real affect that irresponsible and inaccurate reporting can have on human lives.  At the same time, however, the story never forgets its place and gets too preachy and, in fact, actually offers a reasonably in-depth examination of both sides of the conflict.  Plus, you get to see lots of reporters get shot in the head.

Stylistically, the book is just amazing.  Every so often a comic gets released that artistically raises the bar a little.  This is one of those times.  At no point while reading it, did it feel like reading a comic, which is always something I appreciate (when done well).  Abandoning traditional storytelling techniques displayed by most comics, the art in The Nightly News still manages to guide the reader through the story but at the same time offers more than just visuals.

The book is packed with charts, info-graphics and footnotes which, if attempted by a lesser talent, would only wind up distracting from the story.  Instead of distraction, however, these elements wind up enhancing the story, forcing the reader to actually (Good Lord!  Gasp.  Choke.) think.  Rest assured, this is not the passive, first-this-panel-then-that-panel experience you have when reading, say, The Ultimates.  The Nightly News requires full participation on the part of the reader, which is something that just doesn’t happen very often.  Also?  Lots and lots of reporters get shot in the head.

Obviously, this isn’t the sort of thing that’s going to have a broad appeal.  In fact, based solely on the story, there might not be much appeal to anyone who isn’t mad as hell at what a sick fucking joke the news media has turned into.  However, if you’re one of those people – like myself – you’re in for a seriously great read.  Do yourself a favor and buy it.