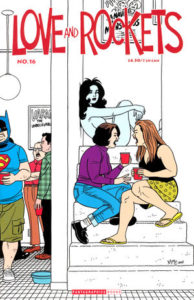 I was going to write this a couple weeks ago but getting the hour or two of free time has been difficult. And I just realized I haven’t posted anything in over ten days so I’ve decided to simply do this instead of actual work tonight. Thank god I have my priorities straight.

So anyway, LOVE & ROCKETS. Great comic, and also there was a band. I guess the band took the name after the comic. Or at least that’s what I read once. Who cares? Let’s focus on the great comic part.

LOVE & ROCKETS is rare for several reasons. Not only is it one of those few comics to gain attention from outside the comic industry, but it did so twenty years ago, way the hell before there was a “Graphic Novel” section in any of the chain bookstores. Back then almost no comics were able to make that claim and, of those that could, LOVE & ROCKETS was one of the very few (along with Maus) that didn’t feature BATMAN & THE ALL PERVERT SQUAD running around in fetish wear. Mostly though, LOVE & ROCKETS is a rare and precious thing for the simple fact that it’s a fucking great comic and has been consistently for damn near 25 years. Off the top of my head, I can’t think of another comic able to make that statement. 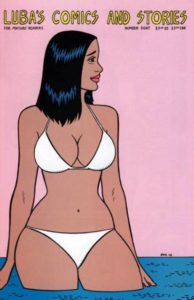 The comic primarily features the work of Jaime and Gilbert Hernandez, affectionately referred to as Los Bros Hernandez, with occasional story and art entries from their brother, Mario.

When it was first published it had heavy sci-fi overtones which, honestly, was one of the things that attracted me to it. Maggie, one of the main characters from the stories written and drawn by Jaime was a comic book character unlike any other before and, most likely, since and the stories that featured her were no less unique. Her life was split into two drastically different parts.

The first, and most important, being her life in Hoppers, “a Mexican neighborhood in Huerta, California (and a stand-in for Los Bros’ hometown of Oxnard).” Her time in Hoppers was spent hanging out with her friends, going to punk shows, agonizing over not having enough money to buy the pair of killer boots she wants so bad, falling in and out of love with various crushes, and all the other appropriate activities a post adolescent would find herself engaged in.

The second, but more glamorous, part of her life was spent working as a Prosolar Mechanic with celebrity mechanic and heartthrob, Rand Race. When working for Rand, Maggie would frequently find herself in exotic locations working on impossibly cool jobs while crushing on / agonizing over her boss, Rand.

One of my favorite stories from those early issues is this story where she winds up having to leave the country for an extended (maybe a month or so) time, to work with Rand. The job takes them all to a dense jungle miles away from anything that resembles civilization, where they have to repair a Flash Gordon style rocket that’s trapped under a dinosaur that’s unable to move for some (it’s been at least a decade since I’ve read this book, my memory is fuzzy…) reason. During her time in the jungle, she hangs out with the natives, gets drunk with her co-workers, pines over Race, and desperately misses and writes letters to her best friend / girlfriend, Hopey (as well as the rest of her friends). The same sort of thing anyone might do while working away from home, only in an impossible and exotic location. 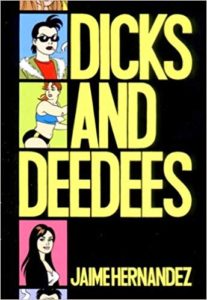 Another great story, actually one of the best stories I’ve ever read – book, comic, manuscript, cave painting…whatever – is a story called Human Diastrophism, which is just one chapter in Gilbert’s PALOMAR stories. This is just an incredible and sad story and by the time it’s over…actually, that’s enough reminiscing. Besides, I don’t want to ruin what is honestly one of the most powerful endings I’ve ever read. What I’m trying to get at is that you should totally be reading these books. Everyone should be reading these books.

Every time I read a new issue of LOVE & ROCKETS, I find myself just a little bit sad by the time I’m done reading. And I think the main reason for that is that this is one of the few comics that doesn’t stay in one place for very long. The main stories in the book, especially those written by Gilbert, are huge in scope, spanning two or three generations. And they’re so well written that you wind up getting to know and love the characters. And you’ll be reading the comic for a year or two and all of a sudden Gilbert will advance the story five to ten years and you won’t recognize some of the characters. And sometimes that’s because the character is new and sometimes that’s because the character is old and looks and acts differently than you’re used to. And that’s another testament to the quality of the writing: the fact that it’s so consistent and so good, that you come to know characters based on dialogue and behavior and not just because they look the same, or because another character refers to them by name.

Another reason the book sort of makes me sad is that many of the stories are narrated in the first person by one of the characters in the story, and the character talks about things as they matter to him at that point in time and NOT as they used to matter to him at some point in the past, which is where the reader is usually coming from. For example, imagine that you were closely following a relationship I was having with one of my ex-girlfriends from seven or eight years ago. And you were really close friends not only with me but with her as well. And then you disappear for the last six years and you come back to town and you run into me and you’re dying to know all about what’s been happening with me and her. Except, it’s six years later and I’m married to someone else entirely and maybe my ex dumped me or maybe I dumped her or maybe she’s dead. It’s not a good thing, it’s not a bad thing, it’s just…this thing that happened a while back, one of a million events that occurred sometime in the past. It’s not that it doesn’t matter to me anymore, but I’ve had six years to get over it and move on but you’re finding this out for the first time, six years late in the game, and the news that we’re not together anymore might be totally devastating to you. And that’s exactly how much of the ongoing story is presented. Pretty goddamn clever. 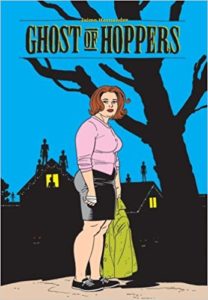 And the fact that this book actually elicits an emotional response from me…I think that’s why it’s my favorite comic ever. Somehow, SPIDERMAN just doesn’t get to me the same way LOVE & ROCKETS does.

I need to stop now, I’ve never really reviewed (at least, not without trashing it for being a piece of shit) anything before and I have no idea where a good stopping point is and I’m so crazy about these comics that if left to my own devices, I’ll never shut the fuck up. Let’s leave it at this:

Buy these books goddammit. Buy them and read them. Not all of them, I’d never ask anyone to commit to spending that kind of money just on my say-so. Start small and buy one of the collections. If you’re flush with money right now, you might wanna check out the larger collections like PALOMAR and/or LOCAS. They’re fifty bucks each, but they’re over 500 pages and 700 pages, respectively. You’re hardly getting screwed out of fifty bucks.

OR, if you lack the funds, or just faith in me (sinner), then buy one of the softcover collections of the series. There are like 20+ volumes to choose from and they’re all about twenty bucks.

OR, if you’re completely pathetic and as poor as I am, go to Amazon and get the hardcover collection of the first volume from the “Used & New” section, where you can have it for less than five fucking dollars. Click here to see what I’m talking about. Or you can click on any of the images in this article and they’ll take you straight to the publisher’s site and you can order from them which, really, is what you should be doing if you can afford to. They’ve been putting these books out forever and they’re not exactly a Fortune 500 company for doing it. Okay, that’s enough for now, go buy one of these books and read it. And let me know how you like it when you’re done.

UPDATE:
I wrote this about eight years ago and, with the exception of some of the pricing, every word of it still holds true.  Last summer I wound up reading one of Gilbert Hernandez’s non L&R graphic novels and it was so damn good it almost made me cry.  It’d been so long since I’d read any graphic novel that I’d forgotten how enjoyable it could be.  I wound up buying all of the L&R stuff I hadn’t read in the last five years and read it over the winter break and literally all of it was excellent.  I’ve got another stack of his stuff to read for spring break and for next summer and I seriously can’t wait to get started on it.  Seriously, for the love of God, stop what you’re doing and go buy some of these books, they’re just that good.