So last month I mentioned that there was a Best Of The Inland Empire contest going on and that my wife and I were hoping to win for Best Bakery.  I mentioned that not only here, but on Twitter and Facebook as well, and I sent out emails begging for votes, as did my wife.  Within a day we were way in the lead, and after a few weeks, I was pretty sure we had it locked up.  Voting ended a week and a half ago and today they finally announced the winners and guess who won Best Bakery, 2009? 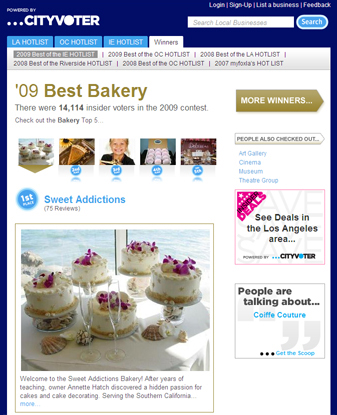 Goddamn right.  So, many thanks to everyone who voted, I don’t know if this is gonna make any difference to our business or not, but it’s still pretty damn sweet.